Remote volcanic islands, ancient bones, scientists and a species brought back from the dead. It might sound like a Jurassic Park rip-off but this is the story of how a diverse team of researchers un-covered the fate of the Tasman Booby.

On Lord Howe Island, the husk of an old volcano 1600km east of Australia, a storm thrashed against the coast. The wild weather gouged chunks out of the cliff face, tearing off layer after layer of history. When the winds died down, exposed for the first time in over 500 years were the bones of an ancient seabird. More remains were unearthed during the construction of the Lord Howe’s airport and 890km away on Norfolk Island.

The bones found their way to a team of scientists, Gerard Frederick van Tets, Peter Fullagar, C.W. Meredith and P.M. Davidson. Gerard and his team were paleontologists, scientists who learn about plants and animals by studying their fossils. To determine which species the bones belonged to, each piece was measured meticulously. The group sized up the results, comparing them to other known seabirds. They soon had their verdict. In 1988 they announced the discovery of a new species, the Tasman Booby. As they described it, the Tasman Booby closely resembled the Masked Booby, a large diving seabird still found throughout the tropics. However, there was one important difference. This ancient booby had been supersized.

So, where were they? Where does one hide a supersized seabird? Gerard and the team painted a dark picture of the bird’s fate. The Tasman Booby bones found on Norfolk Island were jumbled amongst bones of the Kiore, or Polynesian Rat. By introducing new species, early Polynesian settlers may have driven the Tasman Booby to extinction. The settlers may’ve also added booby to their own menus. European sailors disembarked onto Norfolk and Lord Howe Island in the 1780s. They soon discovered that large seabirds and seabird eggs were a great way to satisfy their appetites. Whichever meal had been the booby’s last, one thing the team was clear on, the Tasman Booby was extinct. Gone. Lost forever. But not everyone would be so sure.

A bone to pick

Paleontologist Richard Holdaway and fellow scientist Atholl Anderson were inspecting a different set of ancient bird bones from Norfolk Island. Niggling doubts began pecking away at them. Sure, the Tasman Booby was large but was it really that much larger than Masked Booby still living on Norfolk and Lord Howe Island? In the booby world, the females are the heavy weight champions. Was it possible that the modern bones Gerard’s team had studied were all male, while the ancient bones were just females that happened to be slightly, uh, big boned? Richard certainly thought so. But how to prove it? He mentioned his conundrum to a colleague at the University of Canterbury in New Zealand. She directed him down the hall to the office of Tammy Steeves. Tammy studied living boobies and would provide a whole new angle on the debate.

Previous investigations had focused on the size and shape of the bones but Tammy was a geneticist, and geneticists analyze DNA. DNA is found inside the cells of an organism. It is the instructions that tells the cells how to act, look and come together to make a whole creature. These instructions are passed down from parents to offspring, so that the most closely related individuals or species have the most similar DNA. By comparing DNA from the ancient booby bones to the DNA of living boobies, Tammy could help unmask the true identity of the Tasman Booby. 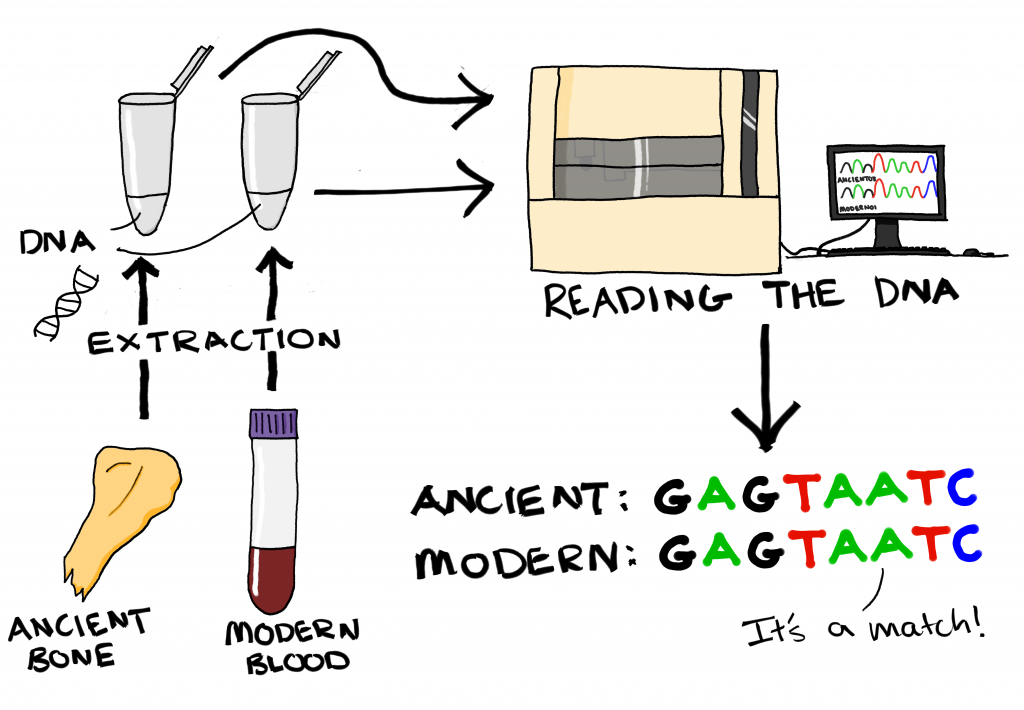 DNA can be extracted from fresh bird blood fairly easily but extracting it from ancient bones would be a much harder task. Tammy and Richard sort help from Michael Bunce at Murdock University in Perth Australia. Michael’s group of scientists were experts in working with ancient DNA. They took up the challenge. Working within a specialized clean-room, the scientists wore protective clothing to prevent contaminating the samples with DNA from themselves or other organisms. Small pieces of the bone were ground into a fine powder. The powder was washed with chemical after chemical until only the DNA was left.

But there was no guarantee the bones still contained DNA or what condition that DNA would be in. Over time, DNA degrades becoming fragmented and riddled with errors. If this had happened to the Tasman Booby DNA, the machines in the lab would not be able to read it and the samples would be useless. All they could do was wait and see.

Out of the six bones they started with, only one gave them the full section of DNA they were hoping for. Two others gave them partial pieces. Luckily, it was enough. When the Tammy’s team compared the DNA from the ancient bones to DNA from Masked Boobies living on Norfolk and Lord Howe Island, she discovered they weren’t just closely related. They were identical! Where does one hide a supersized seabird? In plain sight.

Today, the first bird ever rediscovered using DNA is still flapping about on islands in the North Tasman Sea. Classified as a subspecies of Masked Booby, their population size is small, with likely fewer than 3000 individuals. However, further genetic research has shown that the Tasman Booby has had a pretty stable population for the last 25,000 years.

Because of their location, continued conservation of these birds requires a team effort from organizations in both Australian and New Zealand. And, if you ask Tammy Steeves, team work is an important part of this story. She’ll tell you that this much more than a story about the rediscovery of an extinct bird. This is a tale about how different areas of science can achieve much more when they work together. 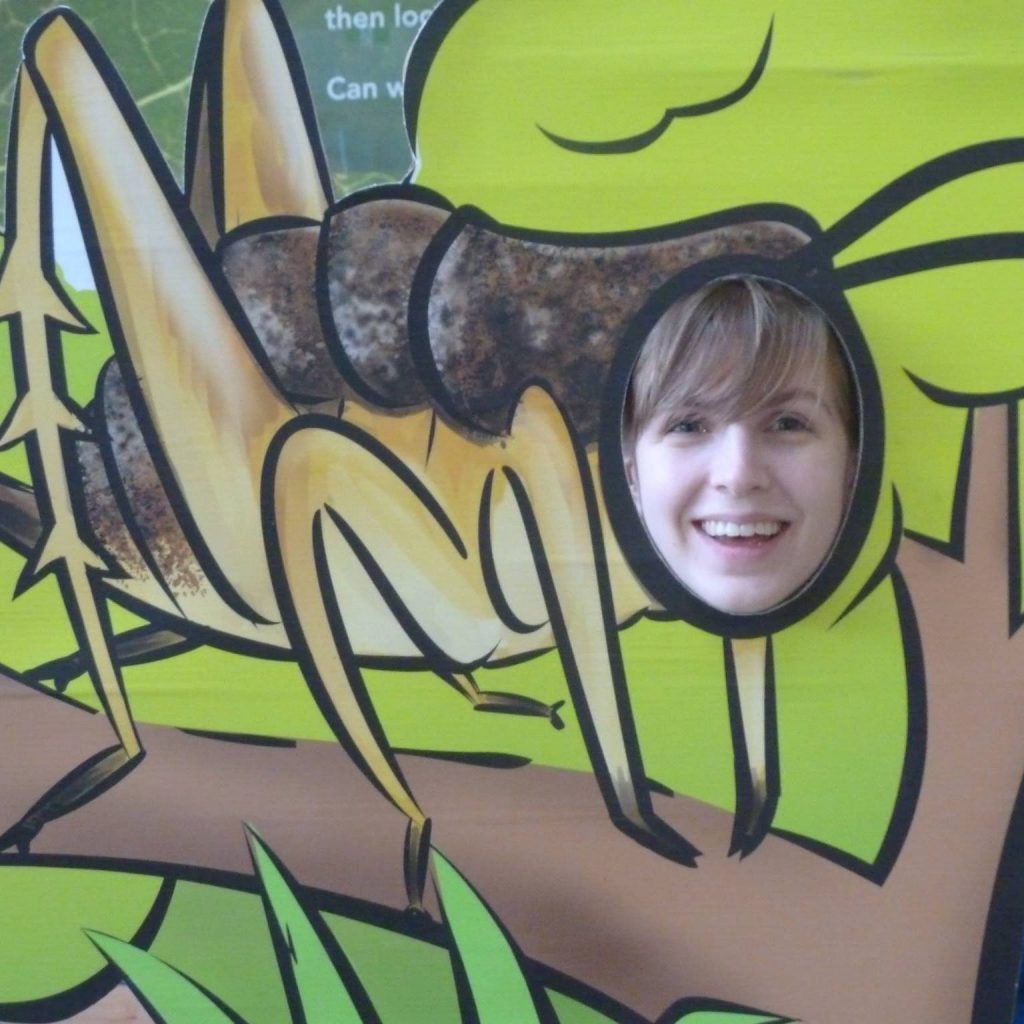 Hello, Kia ora! Rachel here. I’m addicted to learning and sharing science. In New Zealand, I used genetics to learn about endangered plants, birds, fish and giant insects. I recently migrated to England where I use genetics to help diagnose diseases in the common ape, humans. Tweets @rachel_weta.

van Tets et al. 1988. Osteological differences between Sula and Morus, and a description of an extinct new species of Sula from Lord Howe and Norfolk Islands, Tasman Sea. Notornis 35: 35–57.